Having visited Fortingall earlier, we checked the Ordnance Survey map and found that there were a few stone circles in Killin. Killin is a small village in Perthshire of which I have fond memories; a place I visited often as a young child, and somewhere that I used to regularly cycle to about twenty years ago.  It has spectacular rapids called the Falls of Dochart, and in summer when the river is low, you are able to purchase a drink at the nearby pub and take it across the road to drink whilst sitting on the huge rocks next to the Falls. 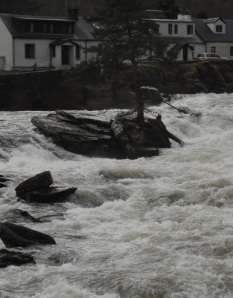 Although I had spent time here in the past, I was never aware of a stone circle, so I was getting quite excited to find it. The Kinnell Stone Circle seemed to be located near the Falls of Dochart Inn, so we drove there and parked in the adjacent pub car park. It was still raining fairly heavily, so we wrapped up again and headed off to search for the stones.  We walked down a track to the left of the pub, and spotted a land rover parked nearby, so we decided we would ask the men inside if they could direct us to the stone circle. It turned out that one of the men was the owner of the Kinnell Estate, and he gladly gave use directions and told us we could walk right up to the stones.

After walking for 5 minutes down the track to Kinnell House, we glimpsed the amazing stone circle across the field on our right. These stones seemed to be almost too good to be true, a beautifully placed circle in an idyllic setting surrounded by pastures, trees and hills. Again, the bleak weather added to the atmosphere, although we both agreed that it would be pretty amazing to see these stones at sunset. 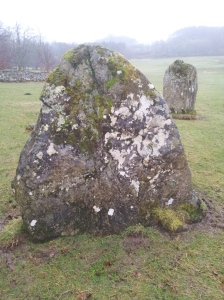 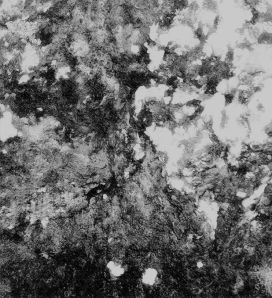 I had a play with this image on my phone using the Pixlr Express App whilst sitting in the pub. I used an effect called Too Old (Logan) and then added a stylise (pencil) filter. I just love the patterns on the stone, and I really want to do some pencil drawings of them. Abstraction in nature at its best! 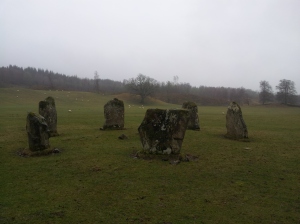 After spending about 20 minutes at the stones, it was really pouring down again, so we decided to head to the Falls Of Dochart Inn for some refreshments.

It was so cosy inside;  a quaint inglenook, complete with a life size dummy of an old lady in traditional costume, and candles on the windowsill. The perfect place to have a drink on a cold drizzly day.

So the stones at Kinnell remain a mystery, but were most likely used in rituals or ceremonies like other stone circles scattered across our land. Not only did I enjoy my visit to Kinnell, I am excited by the possibilities of the abstract patterns on the stones, which I really want to render in pencil or as monoprints.