Having made some initial impressions of tree knots and bark textures using air drying modelling clay, I decided to see if I could make some replicas using plaster of Paris. I have never ever used plaster of Paris before, so I was a bit apprehensive about the whole experience.

I mixed up two cups of plaster to one cup of water and poured them into two greased sandwich boxes. Then I pressed in my greased modelling clay impressions. After about 5 minutes, curiosity got the better of me and I removed  the modelling clay from the plaster. The impressions weren’t very “impress-ive”, and I got even more impatient and tried to remove the plaster, which subsequently cracked into many pieces! Fail!

I was determined not to give up though, and had a very small amount of alginate put aside to try one rainy day…ironically today was probably the best day of the year, but never mind, it was a day when I had time to myself to get on with work.

I mixed up 18 grams of alginate with 35ml of water and waited for it to turn pink, before pouring it over the moulds. I found that I didn’t have nearly enough to do all the moulding which I wanted to, so had to make do with just three. 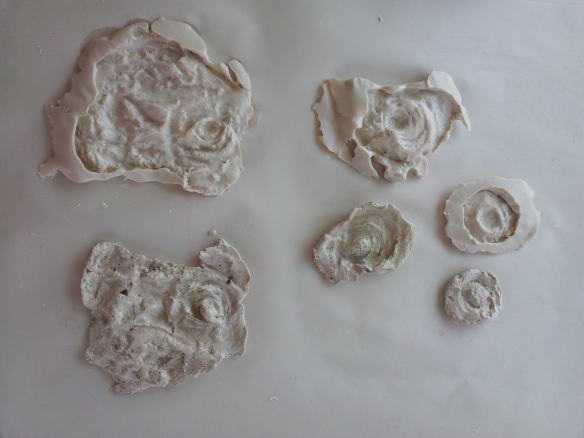 Having made three moulds, I wanted to keep going, and have another attempt with the Plaster of Paris. This time, I laid two of the smaller alginate moulds into sandwich boxes and poured a small amount of clay over them. 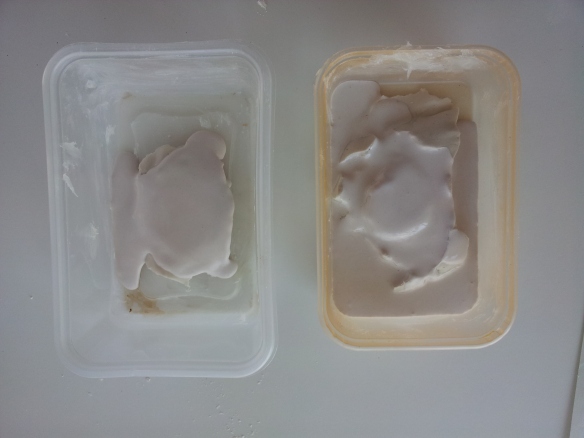 I left them for ten minutes to set, then carefully peeled them off. The smaller mould worked fine, but the larger mould (on the left) broke up into bits, leaving only the plaster cast, which was actually okay.

Again, I’m not sure how I will use these, but I think they may be part of a bigger piece of other fragments of the landscape. I love the whiteness of these pieces, and want to try to keep the minimalist feel to my work. I actually feel a sense of achievement today, although what I have produced isn’t anything innovative or cutting edge, I personally feel that I have made something with a medium which I have never used, and feel a bit excited by the results. I think that it may be something which I experiment with more in future, to make more imprints, perhaps in the form of plaques.