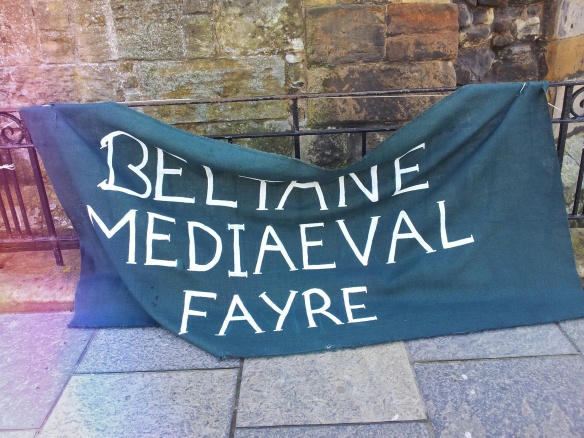 I went to the Beltane Fayre at St Andrews today, as I heard there would be a maypole there….something which is practically non-existant in Scotland. Although rain was forecast, it turned out to be quite bright and dry the further east I drove, and was a lovely sunny day when I reached St Andrews.

It was a mediaeval style event, with re-enactment groups battling with swords, small tents selling mead, traditional silversmithing and copper jewellery, and mediaeval music playing. All the participants wore mediaeval costumes, and many even spoke in  “olde worlde language”…which was a bit embarrassing when being asked “Fair maiden…wouldst thou care to sample my mead ?”

On one of the stalls I met a lady who had samples of dyed wool, and we had a good chat about plants and dyeing techniques. She had some beautiful samples and it was interesting to compare some of the colours she had achieved to the differing results which had occurred on the muslin I had dyed. Wool takes colour much more easily apparently, and this got me thinking that perhaps I should dye some wool, then maybe felt it as part of a larger piece or hanging.

After wandering around the stalls for a bit longer I went to watch the maypole dancing. It was being run by the St Andrews Pagan Society, who also had a stall at the fayre. Spectators were offered to participate, but I chose to take photos instead!

The custom of dancing around the maypole is an ancient fertility rite, which was usually performed on May 1st (May Day). The custom dates back to ancient times when tree worship was practised, and most of the original maypoles were made from birch trees, which were tall and slim. The maypoles were banned by Puritans in 1644, but erected again in 1660 when Charles II was in power.
Maypole dances vary slightly from region to region, but the weaving of the two ribbons together to make a third is thought to symbolise the union of two people creating a third.

It was interesting to have seen this custom take place, and the way that the dance performed wove the pattern around the pole, like weaving with a human loom.

Before leaving St Andrews I took a trip to the beach, and found some seaweed to take some prints from. Driving home through Newburgh, I stopped at the Twist Fibre Craft studio where I purchased some wool, having been inspired by the lady at the fayre. 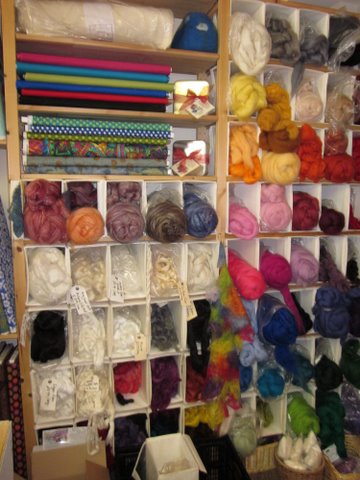 Twist Fibre Craft Studio have an amazing selection of wool!

I bought Cheviot, Merino, and some gorgeous Wensleydale Curls. Tomorrow morning I plan to prepare the wool, and then hopefully may be able to start dyeing it in the evening.  All in all, I had a very fruitful and interesting day.