Its all thanks to Clare Ollif, my sister in law, that I got the best seats in the house at the SSE Hydro for this amazing gig. To meet Boy George, my childhood idol and pin up had always been on my bucket list. My last attempt to try to meet him was to write to Jim’ll Fix It, but thank God my letter didn’t get answered as the consequences of that could have been horrendous!

My mum was going into hospital for a minor operation, and I needed to take her in on the same day that they tickets were on presale. Thanks to my wonderful sister in law who went online for me with all of my details, passwords etc, she managed to purchase 2 VIP tickets for middle front row for myself and Emilia, so the next few months were wracked with anticipation.

Why is it that usually when you plan for something or really want it too badly, it never happens? Well in this case, thankfully it did happen, although we did have a couple of near misses along the way!  I was owed a days overtime back off work, so I took the  Thursday off, and Emilia and I travelled down on the train to Glasgow.

Two minor hitches were that she had a really sore tummy, possibly due to wearing some tight jeans, so we had to buy her some really loose track pants and some paracetamol to try and settle things. Then, when we arrived at the hotel, I stumbled and fell out of the taxi! How embarrassing, and I was actually crying with pain and shock. I could have broken my hip or twisted my ankle, but thankfully I survived. The Holiday Inn was described as being 5 mins from Theatreland by car…well I can tell you it certainly was not! Especially in rush hour. More like 15, which made a hefty taxi bill whenever we needed one. 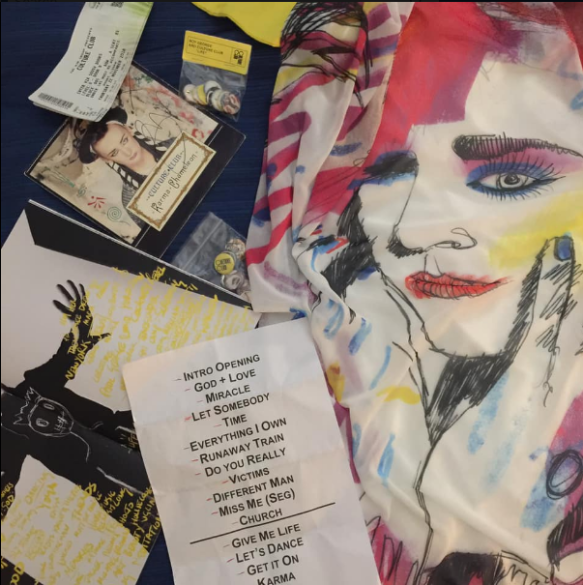 The goody bag contents plus a scarf that I bought at the gig, and the set list which one of the roadies handed to me after the gig

After getting dressed up in our glad rags, we headed to the Hydro by underground from Central station.  On the tube we spotted fans everywhere mainly from what they were wearing and their age range. Once in the Hydro, we were asked to form an orderly queue for VIP, and were given goody bags which consisted of a tote bag, a signed programme, a set of badges and a cardboard mask of Boy George on a stick. We were so chuffed at this, it was a great start to the evening to get all these souvenirs each. We had taken a couple of 7 inch Karma Chameleon singles with us to get signed, and to our dismay, found that one of them was no longer in Emilia’s small handbag. It had either dropped out whilst in the queue, or someone had pocketed it. We had our suspicions who this might be, but could not prove anything.

We then stood for the majority of Belinda Carlisle’s act in a queue to meet the band. I wan’t overly bothered, as I’ve seen Belinda a few times at Rewind. When we finally got through to see the band, I was overwhelmed with nerves and anticipation. How would we get our photos taken? Would they sign the single for us? Would we get individual or group photos? The photographer turned out to be a really nice assistant, who took my phone and took a photo firstly of me and the band and secondly of myself and Emilia with the band.

Boy George is formidable! He is huge! Really tall, with a really big head. His make up was incredible. He said “Give me a hug my darling, lovely to meet you…” and I got a hug and a kiss on each cheek from him . WOW! The rest of the band were gorgeous too. Jon Moss was not on this tour, but I had the pleasure of getting a hug and kiss from Bassist Mikey Craig and Guitarist Roy Hay – such handsome chaps! Then Emilia walked up for her photo. “Oh look at you, you’re so cute, I love your style,” said George, and I have to say that was a huge compliment coming from him. She was dressed up to the nines, with her Stella McCartney military style jacket on, ripped jeans, gold glitter ankle boots and a genuine Philip Treacey hat. She had written him a letter and included a brooch that we had made him, and she also offered him her hat.

“Oh no, you keep it my darling, my head is far too big and I’ve got loads of hats anyway. It looks great on you.”

The assistant asked if I wanted to be in the photo with Emilia, and I stood in between him and Roy Hay again, while George put his hands on Emilia’s shoulders. It was a great experience, and i still can’t believe I met them.

The rest of the night was amazing. We sat in the middle of the front row listening to hits both old and new. My favourites were Time (Clock of the Heart) and Miss Me Blind.  Seeing Time performed was a real treat and watching Roy and Mikey playing all those guitar snippets in the introduction was amazing.

Another real highlight of the evening was Roy Hay’s memorable guitar solo in Miss me Blind. It’s one of those guitar solos I always sing in my head, so to see him perform it live was such a special experience for me.

The backing singers were excellent too, as were the other musicians. My only regret is that my filming of the event was a bit shaky, as I wanted to dance all of the time, and also I think I must have placed my hand over the speaker as the sound is pretty dull in some of my recordings. I did take some amazing photos however, even with my old iphone 6 plus.

Gorgeous George… his voice has definitely stood the test of time 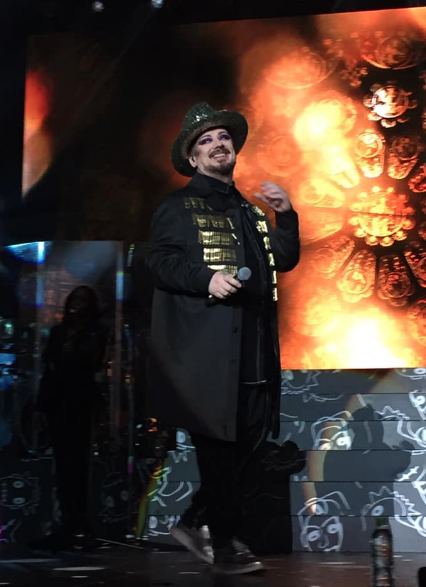 George’s voice was smooth as silk and he gave a truly flawless performance. He is a seasoned professional and his integrity shone throughout the show. I hope to see him again one day, but if it never happens again at least I have the memories of this amazing gig and meeting one of the best bands on the planet.