Recently I came across a method (online) of making paper from mushrooms. Apparently the cell walls of fungi consist of a biological polymer called chitin, similar to cellulose—which just happens to be the key ingredient in plant-based paper.   I found a few pages detailing how it can be done, and also a YouTube video. I decided to give the technique a go, as I thought it might be an interesting way to use some of the plants and fungi I have been finding…and perhaps I could then make the handmade paper into a sculpture to art form of some sort.

The information advised the use of Birch Polypores and also Tinder (Hoof) Fungus, and luckily I knew of a few places where I could source these. After a few hours I had gathered an impressive selection, so headed home to begin the experiments. 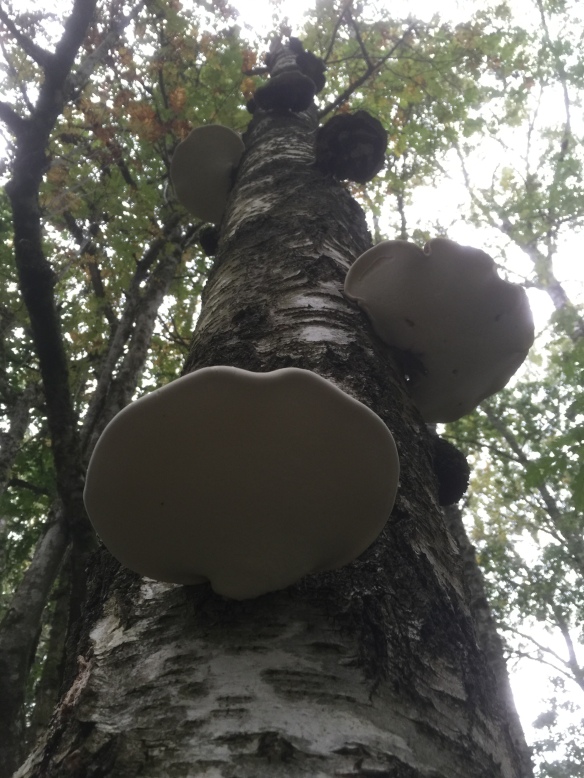 The next stage was to soak the fungus overnight. The “hooves” were so hard, I realised that they needed to be soaked for a longer period of time, so I stuck to the polypores on this occasion.

I began by putting the softest pieces of polypore into a blender with a small amount of water, before liquidising the mixture. In the first experiment, I also added a small amount of shredded paper, and some dried Himalayan Balsam petals.

Initially I tried to follow the YouTube video, but realised that it was literally impossible. Either the maker had added a secret ingredient which made the pulp really strong and bonded it together, or he had edited the video and waited a few days until the piece was almost dry.

Above: My first attempt – a DIY disaster!

It was impossible to flip the mixture over onto a cloth without it sticking to the mesh or the cloth I was putting it onto. So I decided it might take a bit longer, and that I would resign myself to leaving the paper on top of the mesh for a few days, to dry naturally before I attempted to remove it. 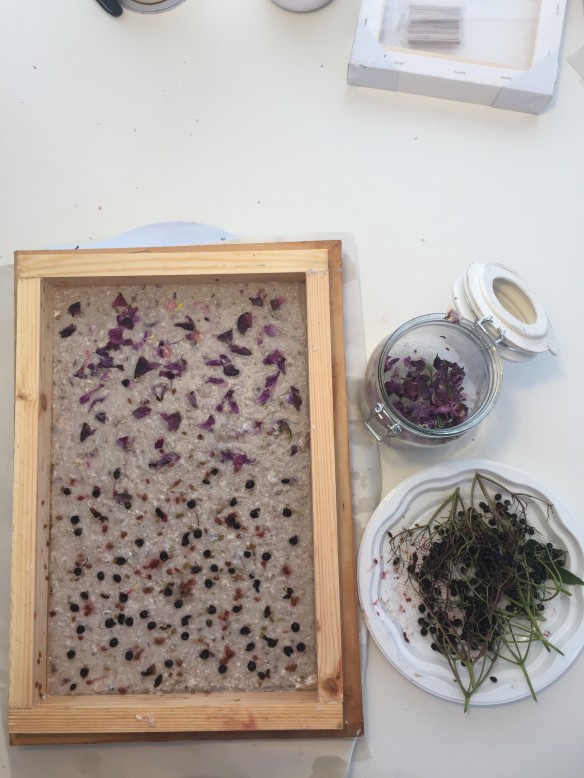 The second experiment was pure mushroom pulp (without any shredded paper) with dried nettle leaves. the mixture looked like homemade mushroom soup and was much more gloopy than the first.

I also added a few larger pieces of nettle into half of the mixture, and lichen into the other half…

I fear that I may have poured this a bit to thickly, but I will leave it and see what happens!

My final experiment was to see if I could shape the pulp over a mask form. If this works, I would be a potentially great way of making a human form from foraged woodland materials.

Having left all three experiments to dry for a couple of days, so far only one of them is dry enough to remove – the first one. Here it is below: 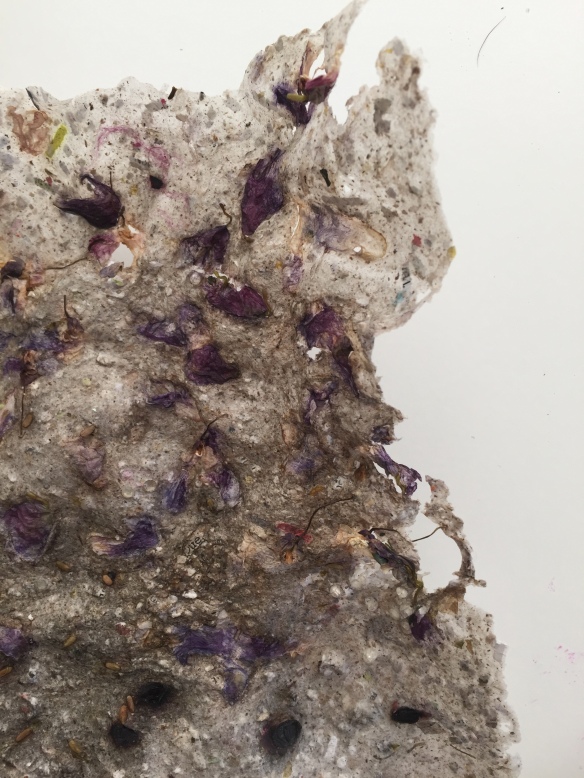 Above: Note the translucent areas at the top of the paper

Elderberries have left their red stains in places

The other two pieces are still not dry. The mask is looking more promising, but I have left them both outside today in an attempt to “bake” them in the sun. The jury is still out  on whether they will work or not, but alt least it is another technique explored which may be of use to join my natural materials together.

If the two experiments made solely from mushroom pulp don’t work, I may resort to adding in the paper again, and perhaps to keep the integrity and concept of the piece going, I will shred the lines from Macbeth and add these into it. I especially like the translucent areas in the paper (which were created by a very thin layer of the mixture), as I am always drawn to the illumination of sculptural pieces. 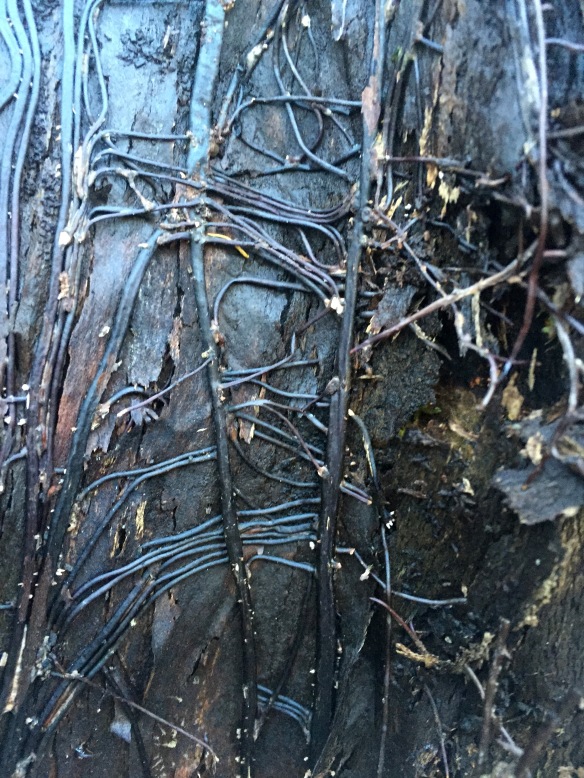 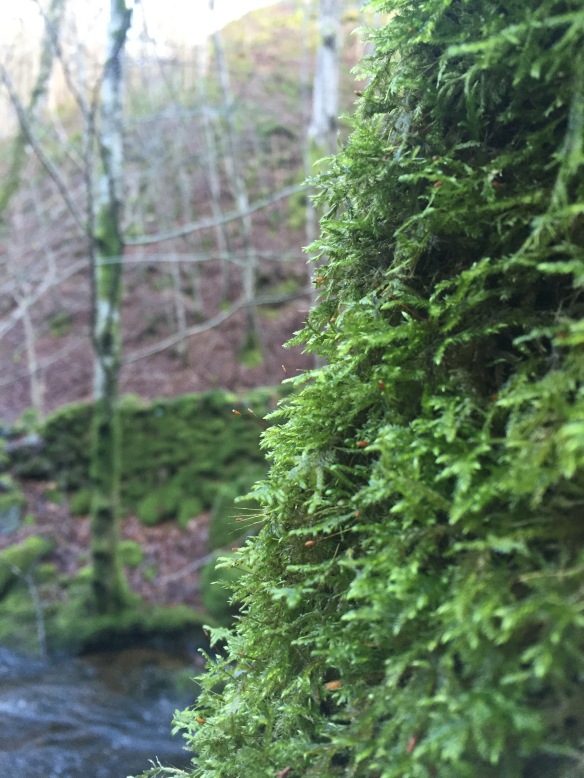 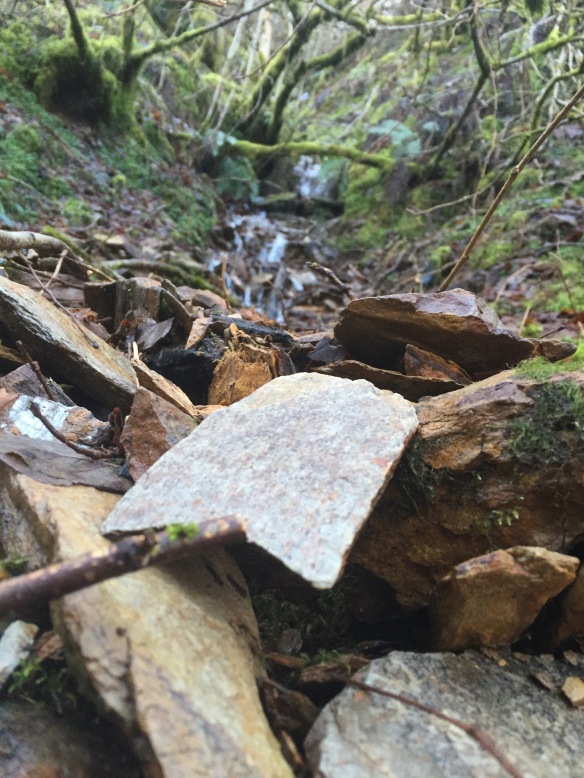 Hooves that tread by nightfall 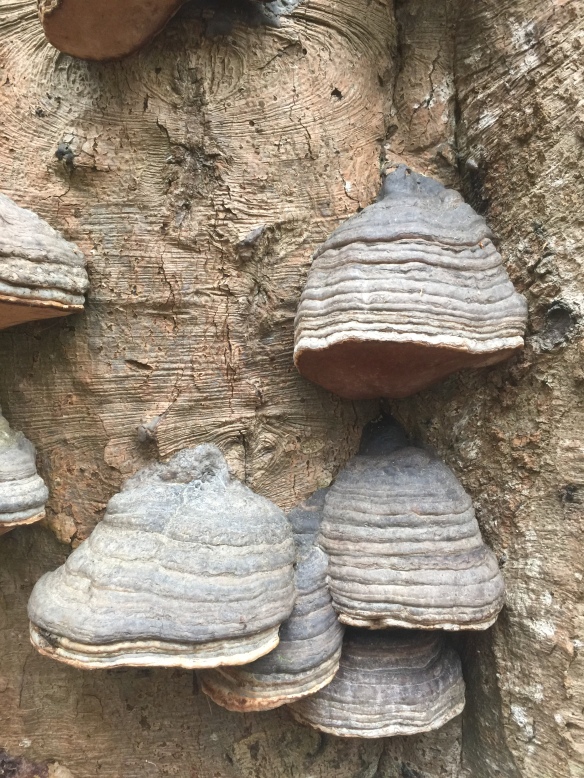 Resting on the beech by day 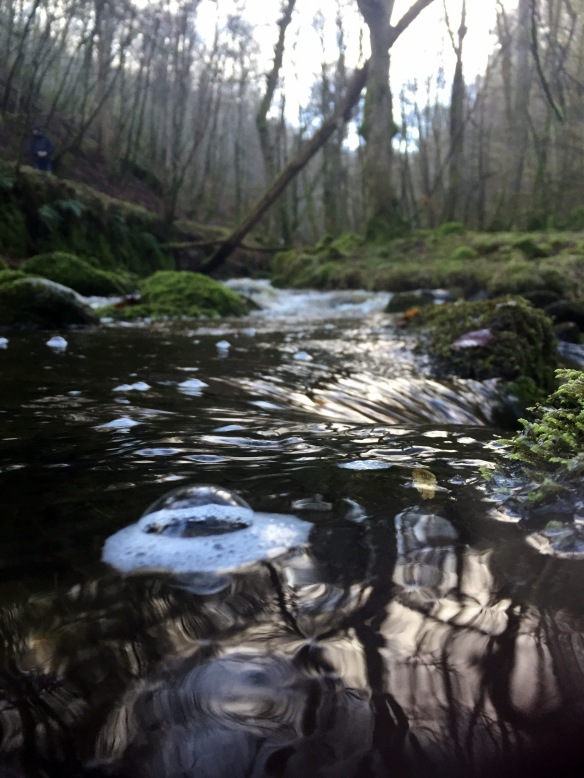 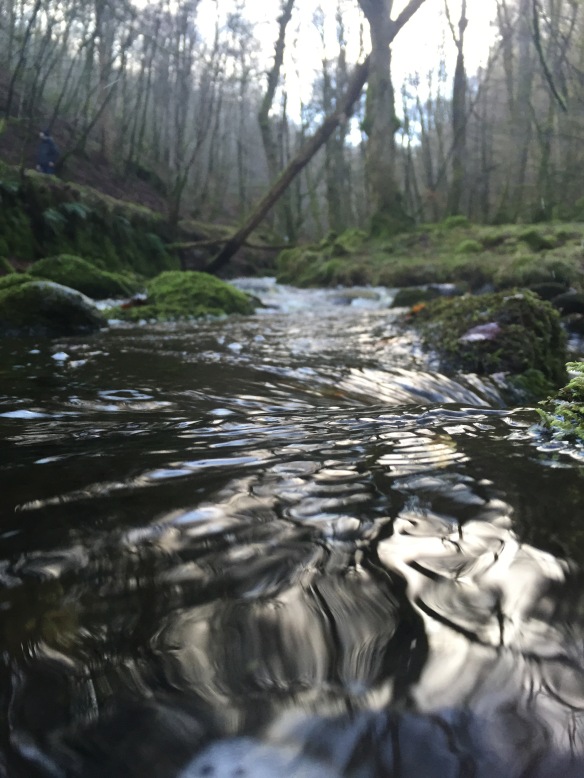 Trapped by the tip of the iceberg 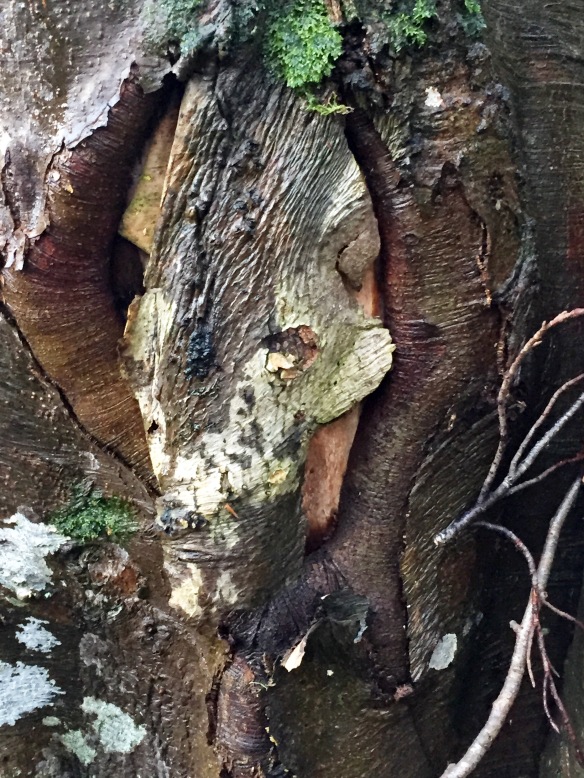 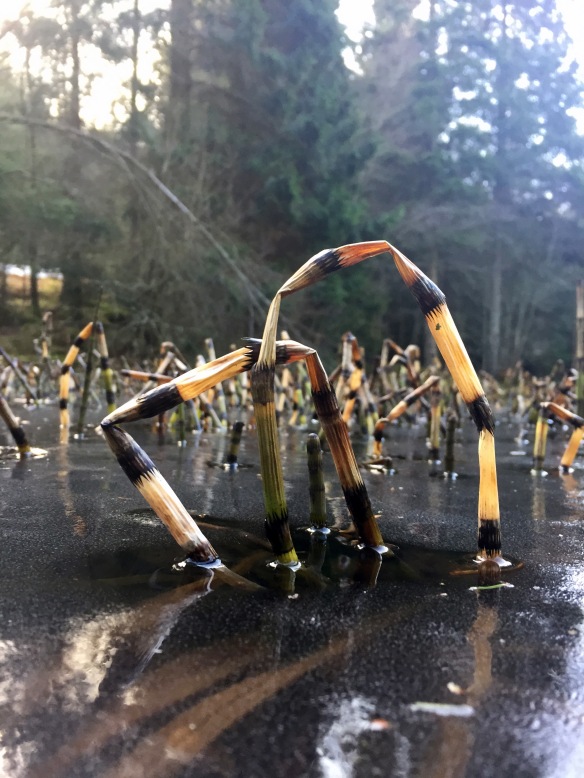 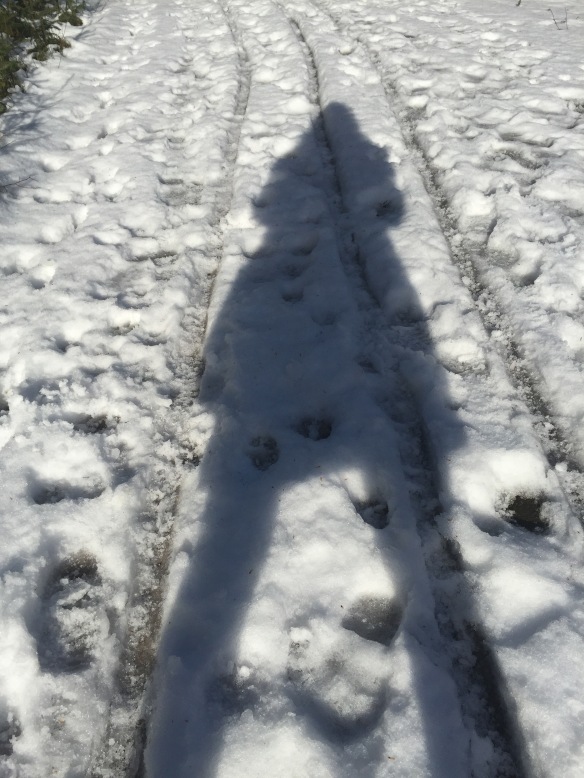 Impressions on the beaten path